How people power and social media swayed the refugee debate 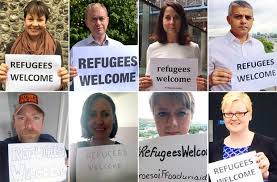 Do you remember when the story first broke out of the refugee crisis in Europe?

Firstly, the hundreds of thousands of people making the perilous journey across to Europe weren’t even called refugees. They were referred to as migrants.

An unfortunate media sound-byte from David Cameron calling the ‘migrants’ a swarm made national headlines, while the media focused on the damage to the UK’s economy these ‘migrants’ were causing, blocking up the route to Calais.

Deaths were frequent but got passive media coverage, there was little focus on the people themselves – they were referred to in numbers.

However, two incidents changed all that. A photo of the man below – Majid Laith – crying as he clutched onto his family when they reached the Greek island of Kos, showed the human face of tragedy.

Majid is now safely housed in Germany, and can be pictures smiling, in sharp contrast to heart-breaking image of his arrival.

This initial photo stunned the world, and the sympathy shifted towards refugees, and away from the disgruntled haulage companies disrupted in Dover.

The media stopped calling them migrants, and began using the correct term for someone who is escaping persecution in their own country – refugees.

But the next headline picture didn’t have as happy an outcome for the subject of the photo.  The dead body of Aylan Kurdi, washed up on the shore of Bodrum, shocked the world once again.

This time, people’s sympathy moved to even greater action, and dozens of petitions were launched in the UK urging the government to house more refugees.

Social media, so often a key player in today’s reputational landscape, once again took the lead in giving everyone a voice, and the overwhelming sound was #RefugeesWelcome.  David Cameron relented to public opinion, announcing that the UK will take in up to 20,000 refugees from camps surrounding Syria.

It’s hard to imagine such great force of public opinion without the presence of social media.  Twitter and Facebook have lead the rise in citizen journalism, and have turned all of us into activists.  The public outcry may have been just as strong without the digital world, but the voices wouldn’t have been so loud.

Connect with HK on Social Media